Communication is a skill

Being able to have a productive discussion is an important skill to have. Of course we all try to reduce the boring bureaucratic meetings as much as possible. But we still need to sit together with our fellow team members and colleagues to discuss, refine and agree on how we will build and integrate our software.

As software engineers, we are constantly learning new technologies, new techniques. People their resumes are more often than not a list of hard technical skill that they have mastered. However, engineers rarely take the time to improve their communication skills. Conway’s law taught us the correlation between software design and people interactions. So if we want to develop good software, the interactions of the people that are building it really does matter. A lot. How they communicate with each other is important. It is a skill just like any other. So how can we get better at it?

Does this matter for a software engineer?

In and outside of meetings we are constantly in communication with each other. So you might think that you have mastered this from daily practice and don’t need to spend any time on improving those skills. Communication and collaboration is something that we do every day, so we assume that we are good at it. But I fear that we overestimate our level at effective communication.

No doubt we all have been in some very unproductive discussions where conflicting interests and opinions collide, where a lot of time is wasted with little to show for, except some frustration and possible bad feelings towards each other. Meetings and discussions aren’t productive or efficient by chance. There is a reason people often try to avoid them.

Those inefficient discussions are something that I have started to pay a lot of attention to, in the last couple of years. And once you see the patterns, it is hard to unsee them. It becomes all the more apparent what a blocker they often are for the quality of our software, the speed with which we deliver it, how much time and money gets wasted and how much grievances these unproductive discussions lead to.

So having productive discussions is important. Experience has shown me that it isn’t something that happens from itself. It is something one needs to work on and pay attention to. You could, of course, spend your valuable time on something else than a blog post on communication. This certainly won’t gain you the same bragging rights as having read the latest shiny object article. But I would argue it is a skill that will have more impact on your efficiency as a software engineer then that new fancy framework.

I’m sure we all know and recognize those anti-patterns, hopefully realizing that they can be a problem. But knowing them does not mean that we aren’t doing them ourselves. Even if we recognize that we shouldn’t.

When I recently took Woody1 Zuill’s mob programming2 course, a lot of what he said resonated with me. Not just on how to do mob programming, but on the whole communication aspect. After all, if a team wants to be able to Mob program efficiently they must be also able to communicate productively. Woody taught us Mob programming through a series of exercises where we needed to interact disciplined and pay attention to how we communicate. I found this very revealing. 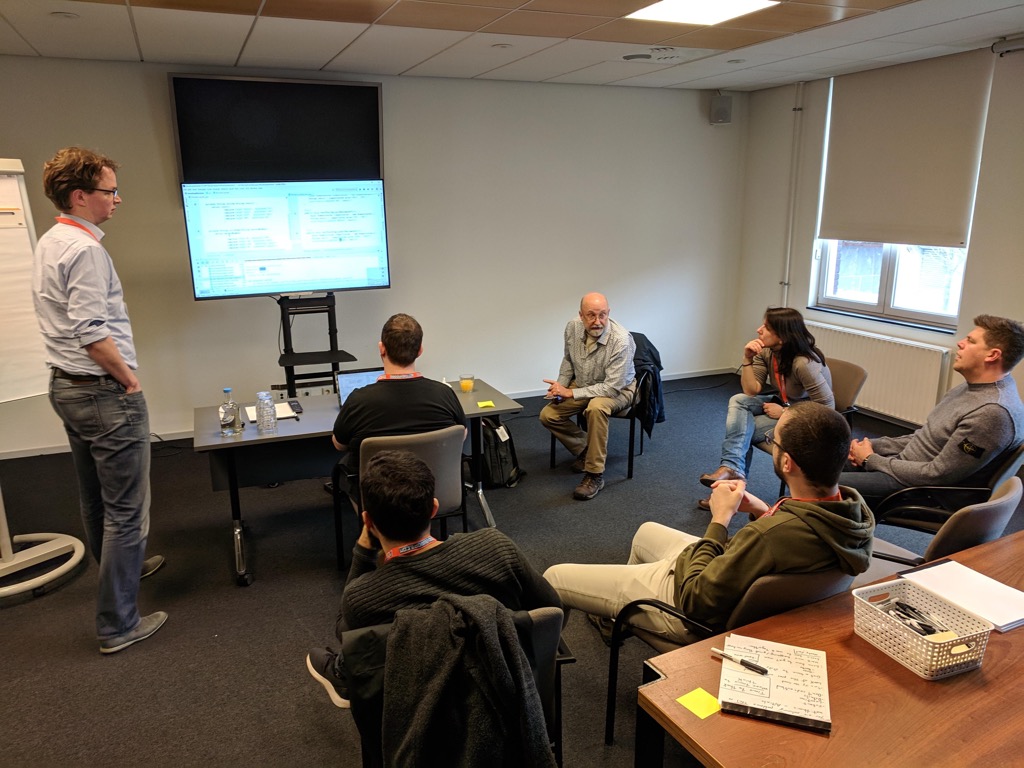 Learn to shut up

By adding our solutions or suggestions non-stop to the discussion, we think we’re gaining speed, but actually, we’re slowing down. It is very hard to keep quiet when we “know better”.

Keep it to yourselves

Let people realize a possible error themselves. Refrain from prematurely adding noise. You may be right, they may be right. Let it play out. It will often go faster, with less confusion and better understanding for everyone. We don’t need to have a consensus on every detail. Perhaps it is not even important in the big picture. So, keep it to yourself. This is hard by the way :-)

“Often, we are just adding noise. Can we keep it to ourselves?” - Woody Zuill

Listening is not just waiting until it is our turn to speak. Are we really listening?

Have a parking lot

Do not continuously interrupt the flow with new ideas, concerns or tasks. Postpone the details, move them to the parking lot so we don’t get sidetracked. We want to keep our focus during a discussion. Discussing one issue at a time. It is also pointless to discuss a lot of could and maybe’s.

“Talking does not expose reality. Doing does.” - Woody Zuill

How would you like to be treated? Treat others in a way you would like to be treated. Don’t let our enthusiasm for a solution make Bullies* out of us. Check the ego. Make an environment where people dare to make suggestions, mistakes and say they do not know something.

“Treat each other with kindness, consideration, and respect” - Woody Zuill

Mob programming is not something that works everywhere. You need to get good at it. The team needs to get good at it. But even when you aren’t doing it on a daily basis, there is a lot to be learned from a couple of sessions. Try it out at work, in a meetup, unconference, … Pay attention to how hard it is to “Not add noise”, “Shut up”, “Really listen”. It is a great technique to practice communication in itself. 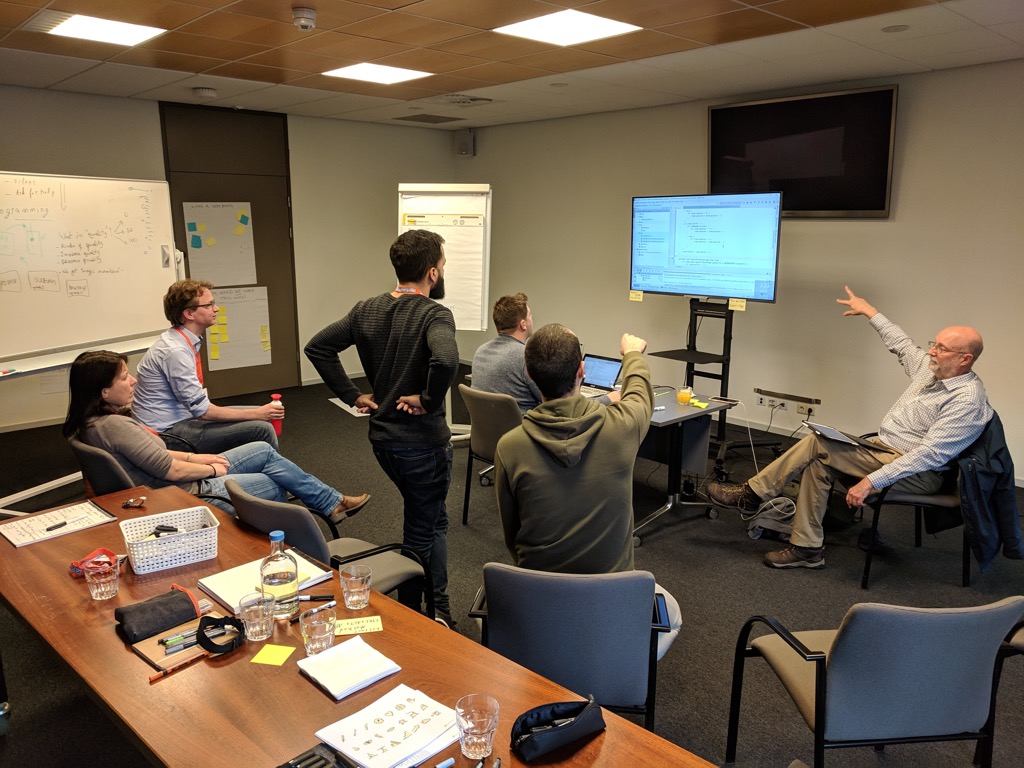 After the anti-patterns, I like to offer some guidelines that can help us in becoming better at good communication, at the risk of sounding fluffy duffy. But these things matter. Once you start paying attention to them you’ll be amazed of their impact and how often that neglecting them is the root cause of problems.

a.k.a. The hard ones to master

Be gentle and polite. Show concern for others. Value their opinions.

Be humble. Our own idea is just one idea. Really consider other ideas

I took the above straight from the Mob programming book. They are short and easy to remember. But very hard to master…

“When we learn how to treat each other well we create a path toward better solutions. So start ‘pretending’ that we are good people” - Woody Zuill

a.k.a. The other hard ones

The best way to resolve conflicting ideas is to act upon them. 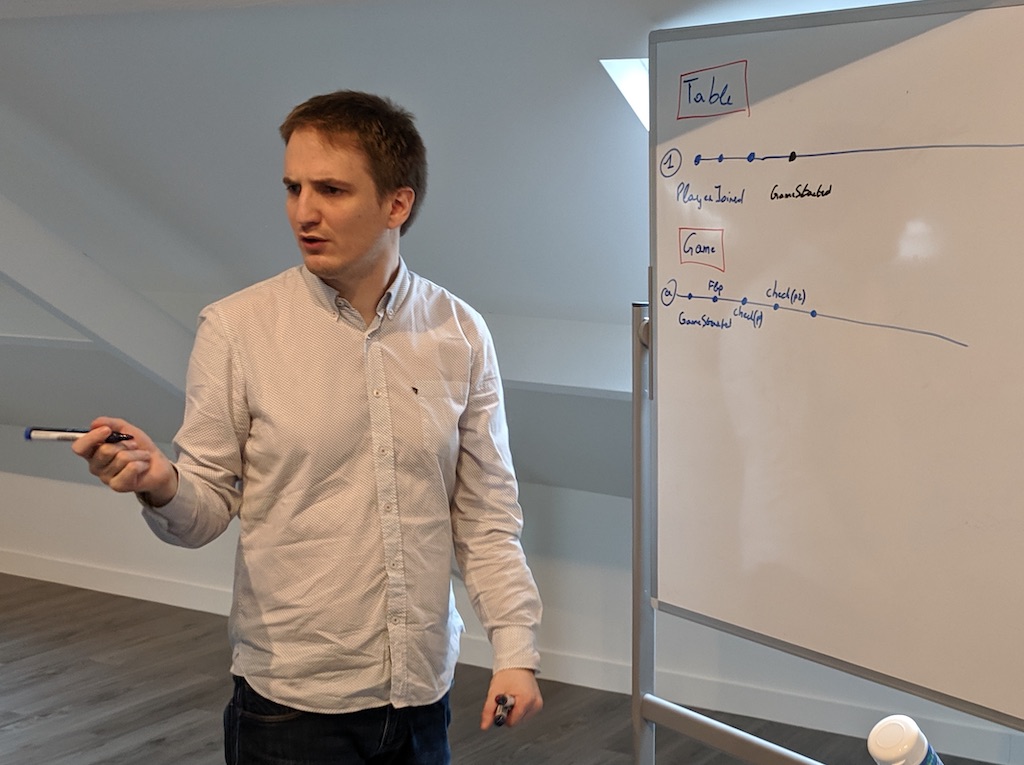 Make a drawing, use post-its. Make it clear what we are discussing and where we are in the discussion.

Letting go of the keyboard, or being the first one in a meeting to step up is a big hurdle to take. People seem to think it is not worth the effort, or maybe fear the attention. But visualizing the topic we are discussing can greatly increase the efficiency of the discussion, speed up the process and making sure that everyone is talking about the same thing.

When we are discussing against a visualization 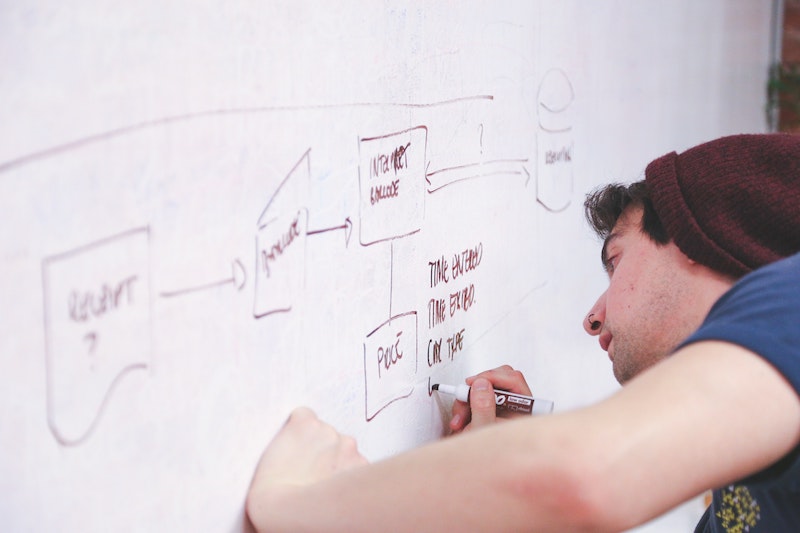 Solving technical issues is hard. But so is communication efficiently and productively. Do not neglect this skill. Just like with everything, it is something that we can get better at by paying attention to it. Good communication is important enough to do so… 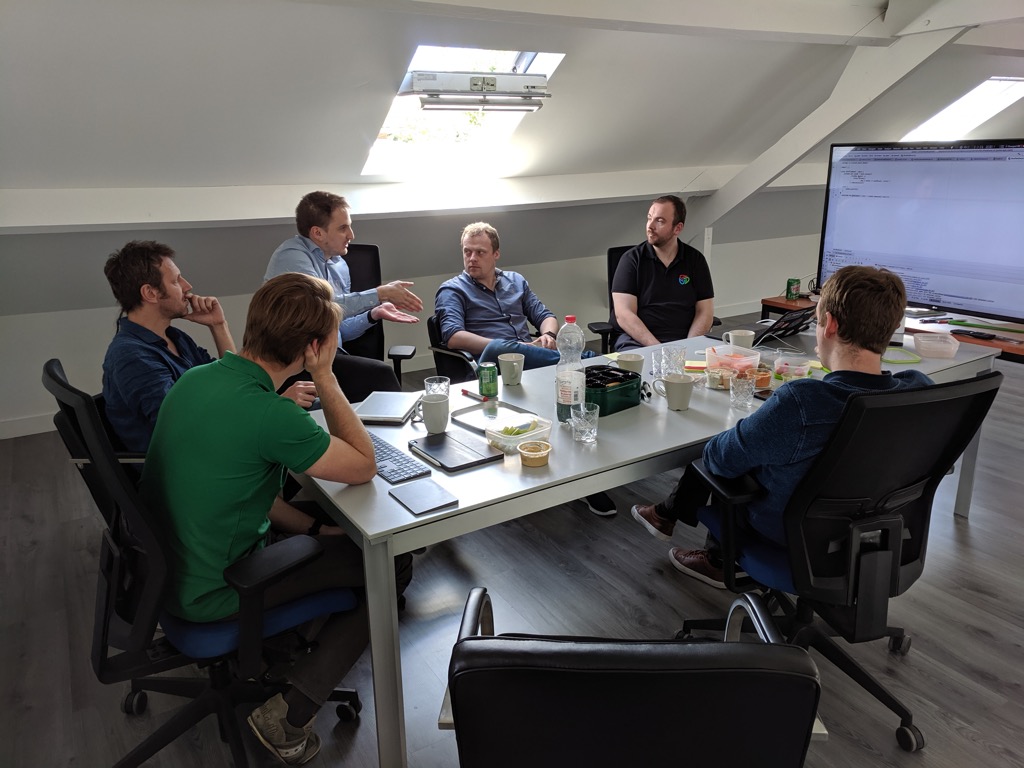 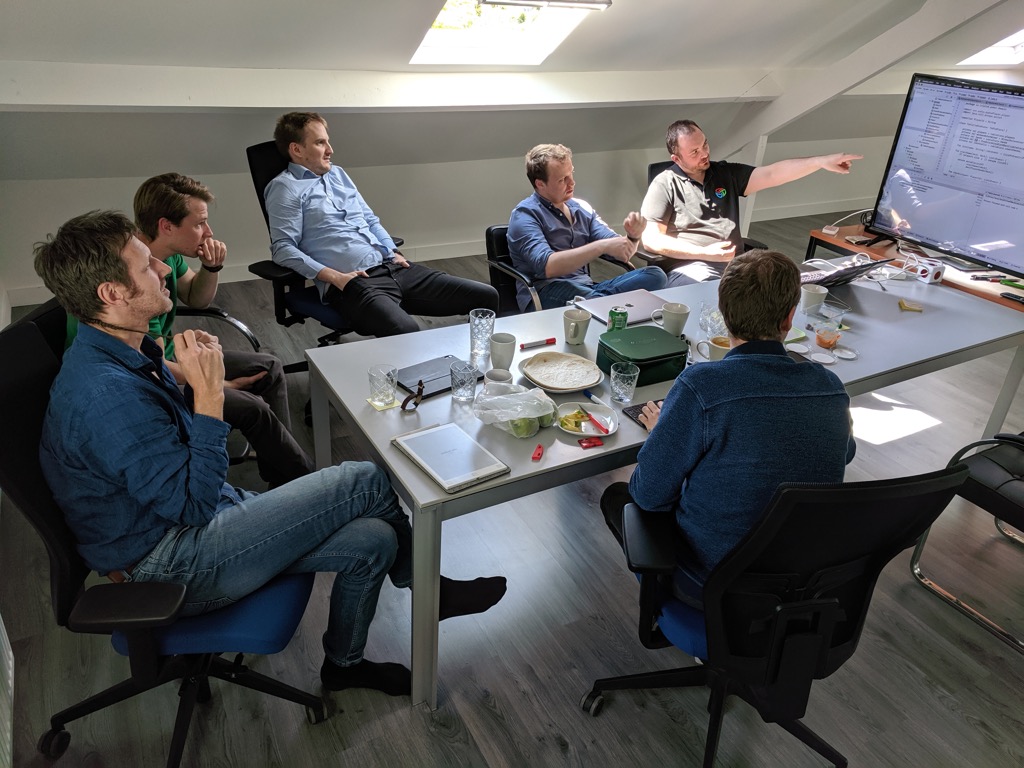 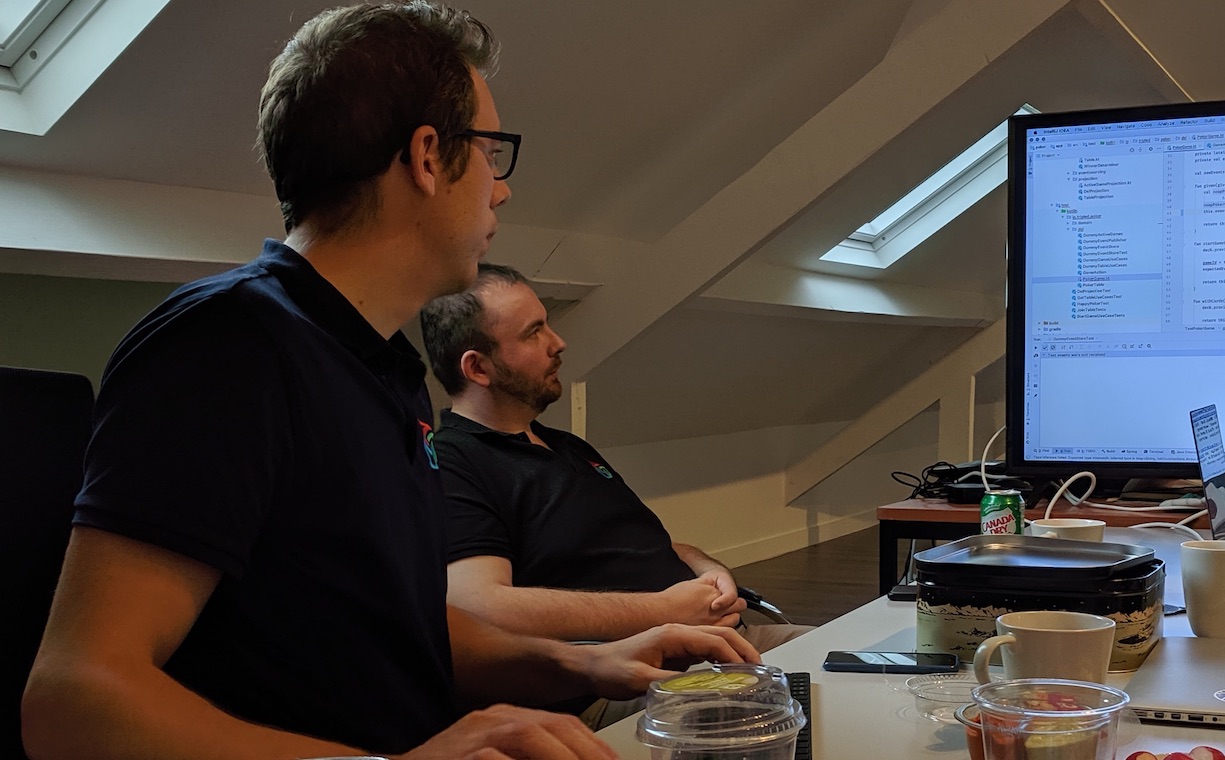 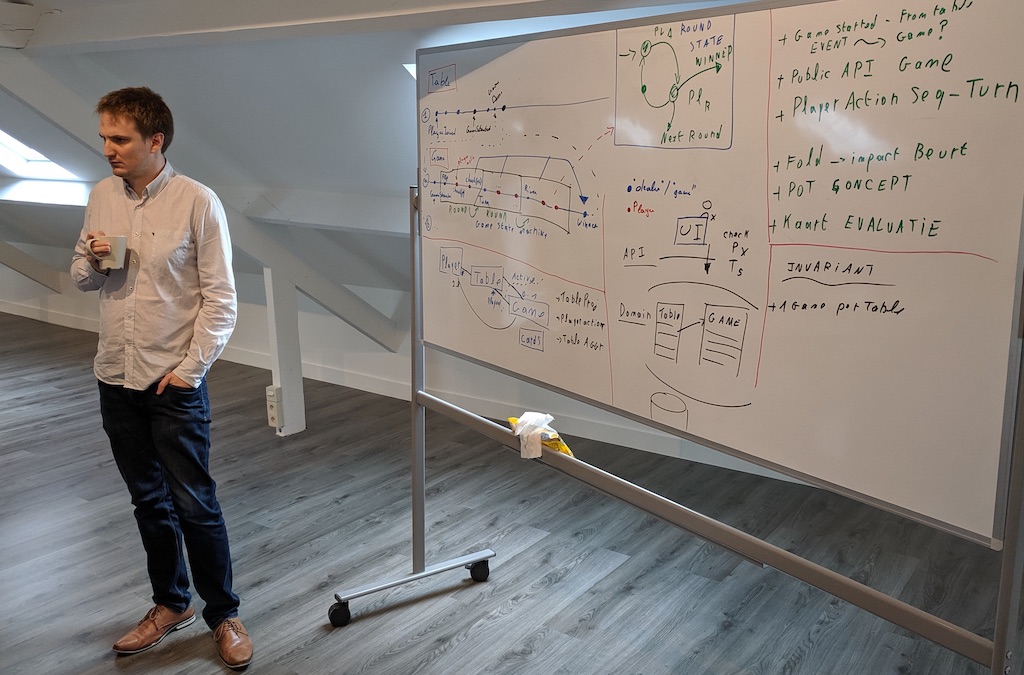