A lazy sunny Sunday evening. I just got back refreshed from the SoCraTes BE 2022 unconference and decided to share the positive vibes I obtained.

For those of you who don’t know, SoCraTes BE is the Belgian Software Crafters community that organizes regular meetups at several locations throughout Belgium (Kortrijk, Gent, Leuven…). The unconference that took place this weekend was a two-day event where Software Crafters got together to sharpen their skills and have a good time.

This year, because of Covid, the conference was held during the summer period, which meant the weather was lovely. There were 45 attendees in total, including the entire Triple D team. Sadly some usual suspects were unable to attend because of the holiday season. There were some first-timers and some old-timers, some young and some people with… more experience (ahem). Since there was no school(Belgian schools are closed in July and August), some people brought their families along, giving the whole conference a real vacation vibe. The next generation of Triple D’ers enjoyed it, although that might have had something to do with the ice cream. 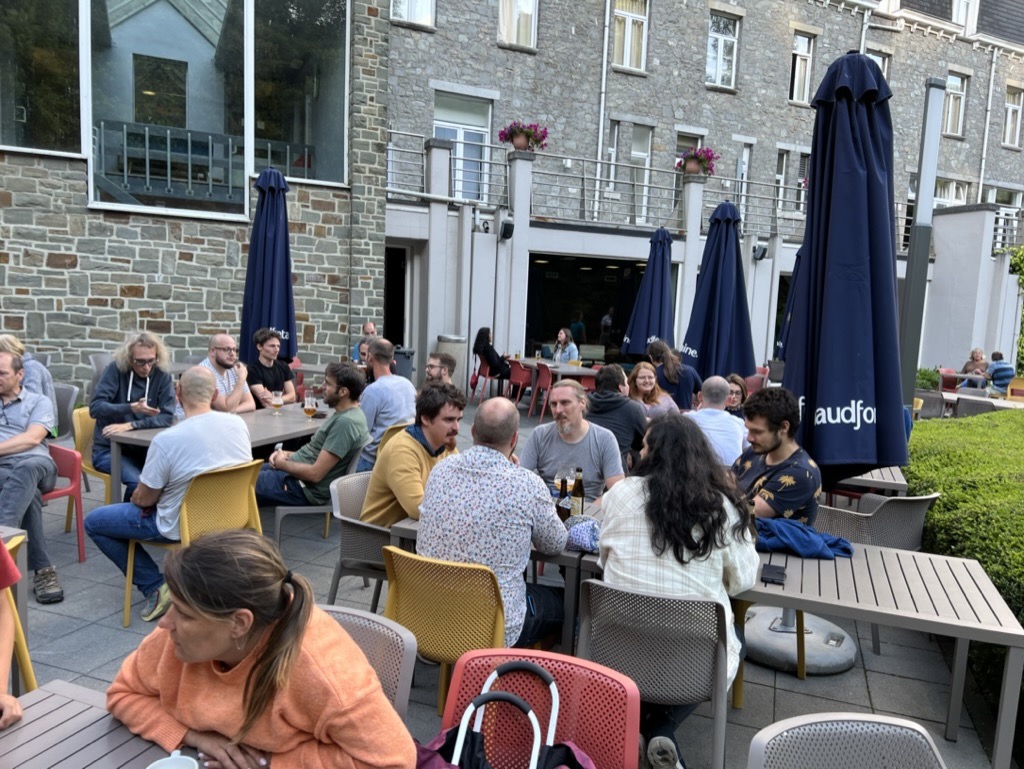 Most people arrived Thursday evening at around 18:00. Several arrived earlier, others much later. But, as is in the spirit of the unconference, there are no rigid, fixed timings, so the conference started on the terras with a La Chouffe in the evening sun. Greeting old friends and meeting new friends. Catching up after this whole Covid thing. At 20:00, we went to dinner, and at 22:30, we got together for a short, practical introduction. After which, there was more socializing.

Friday morning at 9-ish (the “time-ish” is a running joke since we hardly ever start on time), despite Erik (our fantastic facilitator!) being up and about at 9:00 sharp, we kicked off the unconference with a general introduction where Erik explained the spirit and flow to everyone. I was already preparing a code repo for a session I wanted to do in the bar. But obviously, I was present when we started the marketplace, so I could present a couple of topics I wanted to tackle. At 11:00, we finished the agenda for the first day, and the conference was in full swing. 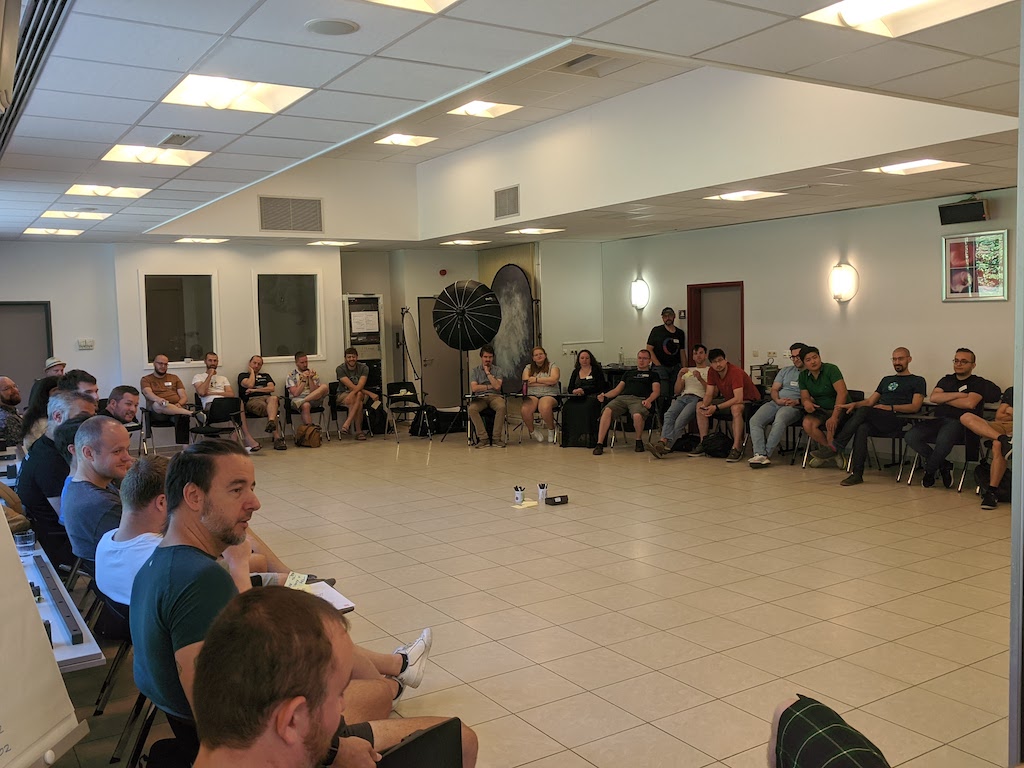 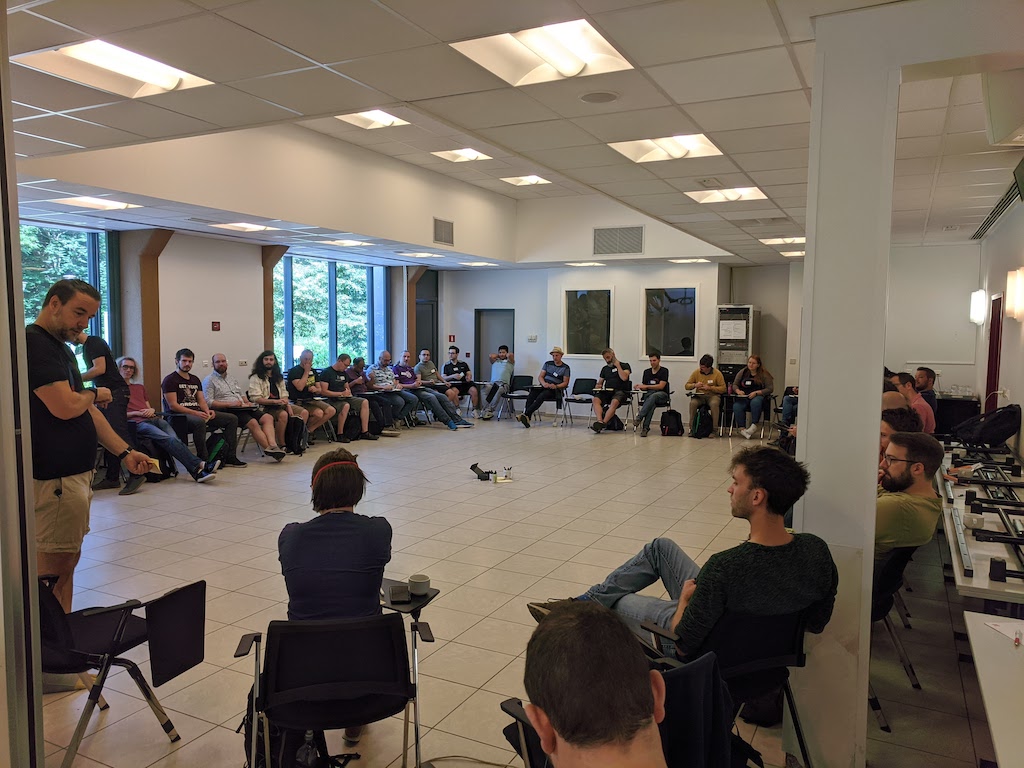 There were too many interesting sessions and topics to discuss them all here. But I’ll give a quick summary of the sessions I attended. 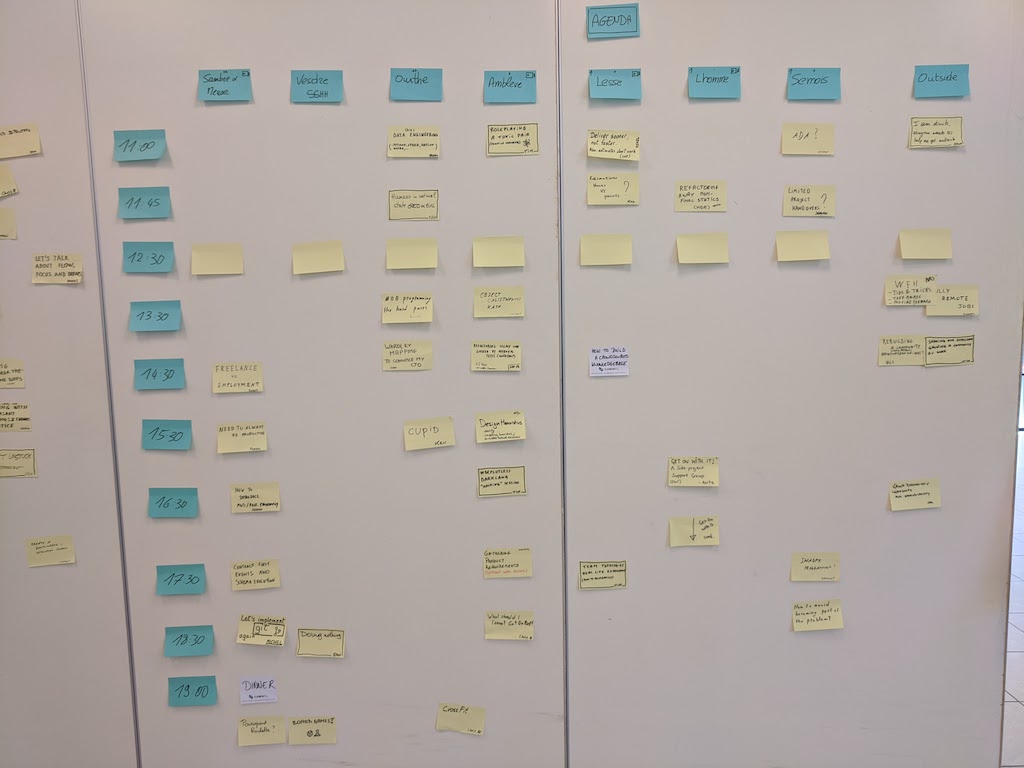 A session where the host of the session was unable to attend because he got caught up in another session. And that’s ok. An interesting discussion still took place. Whoever shows up are the right people.

A cool session hosted by Michel where the group used ensemble programming to implement Git from scratch. Very instructive.

A session where we mobbed on implementing poker in Kotlin starting from BDD scenarios. Not everyone knew Kotlin, but that’s just one more learning experience that did not hold us back. Mobbing is an excellent technique for this. The main exciting discussion here was on the level of detail that tended to creep in the BDD scenarios and what should or shouldn’t be moved to a unit test. 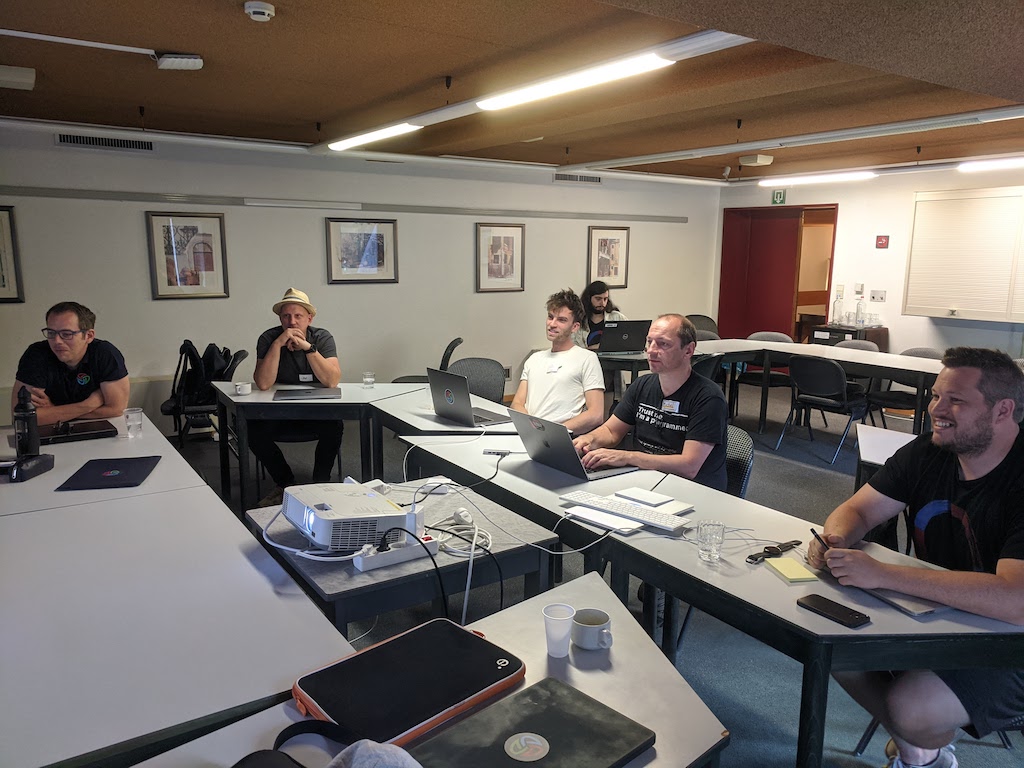 A session from Tim where we discussed the ideas of the Team Topologies book and how to apply them. A fascinating viewpoint from Mathew for me was

This session was proposed by myself because I was interested in people’s practical problems when utilizing Mob programming. The group shared some of their experiences, and I shared some of mine. My key takeaway is this: Senior people can easily forget how much knowledge they have accumulated and how intimidating it can be for a junior to join a group of impatient seniors. Also, when people are stressed, their brain stops working.

A session that we held in the open air. As it was a software conference, I was pleasantly surprised that more than 20 people showed up for a session on management. And we had a lively and thought-provoking discussion.

One of the best quotes from that discussion I’ll shamelessly steal is:

As a developer, you have quick feedback from your code. As a manager, everything takes much longer, and it goes slower. But the impact you can have, the change you can bring about as a manager can be more significant than you can accomplish as a lone developer.

These were just some of the sessions people hosted during those two days. But the important part for me is that, at an unconference, I’m as free as a bird (the law of freedom as Erik calls it). I walk in and out of different sessions. Sometimes I decided to attend no session. Instead, do a little coding, take a walk or chat with others.

After dinner, the group returned to the venue for some lightning talks, board games and football with the kids in the evenings. When the kids went to bed, there was the traditional whiskey tasting available, which paired well with the board games :-)

We had breakfast together on Sunday morning, not fully awake due to late-night gaming followed by some discussions. After that, we had to say goodbye, and everyone went home. Batteries fully charged :) 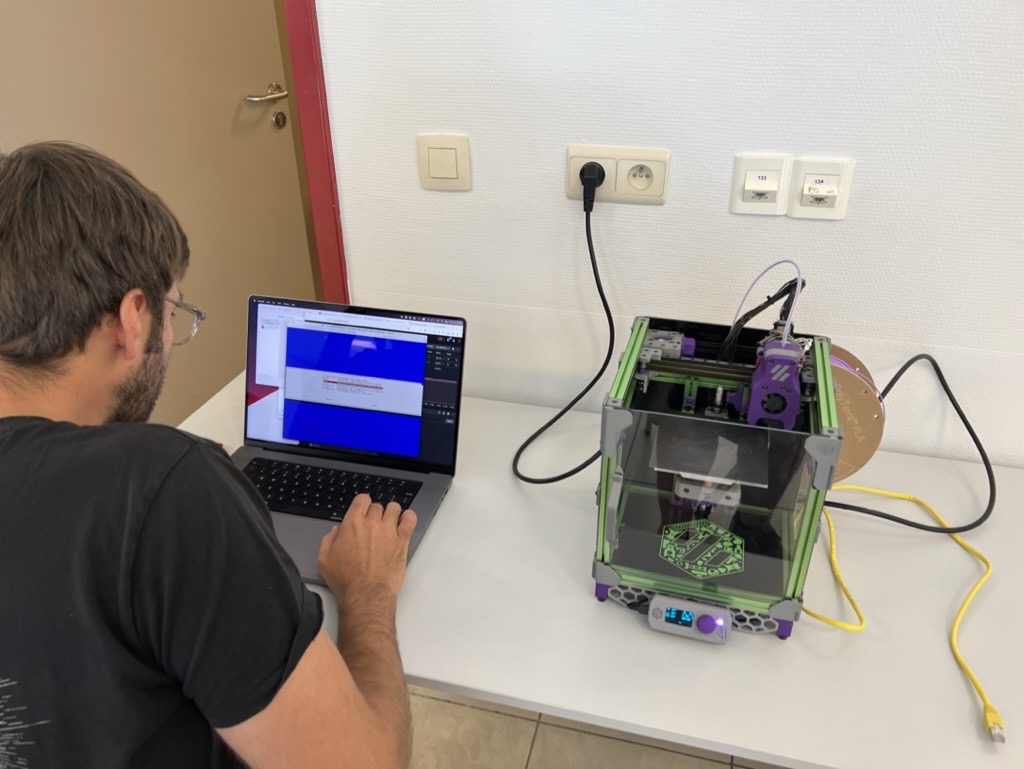 Some people brought their own, self-printed 3d printer 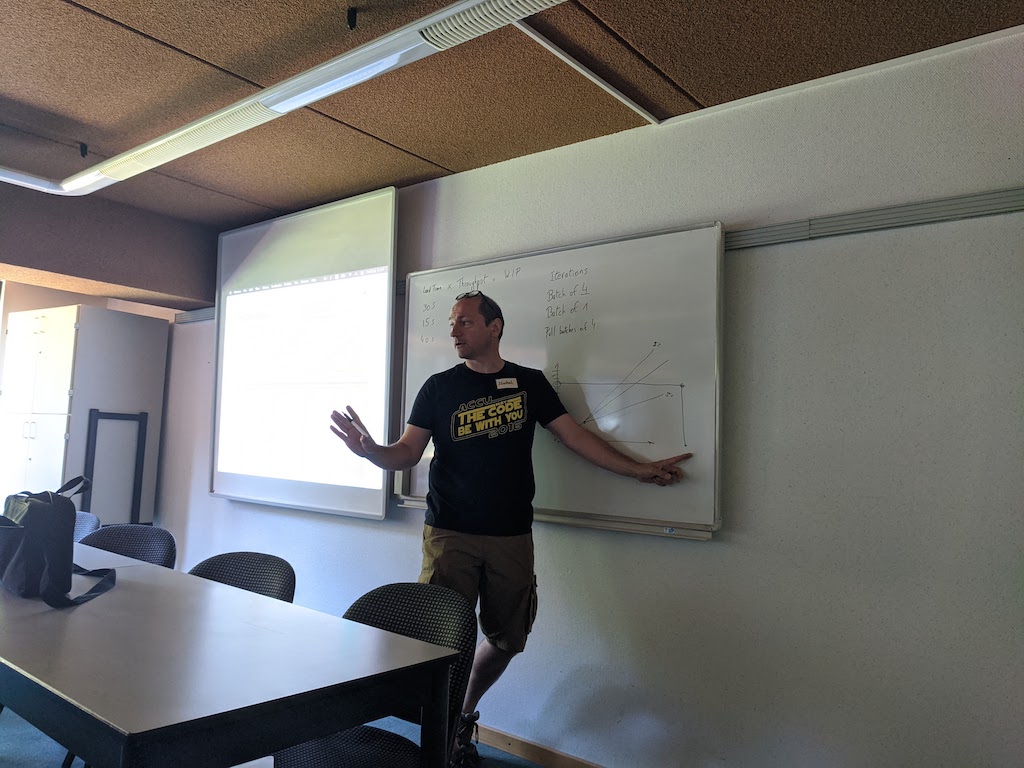 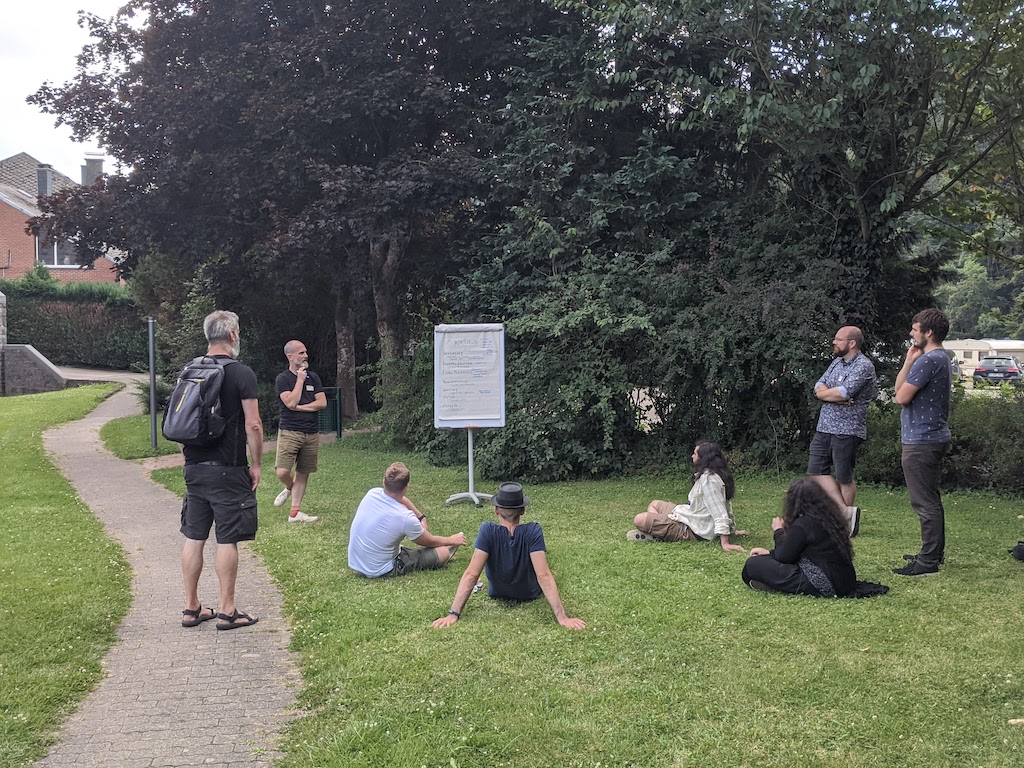 The great weather allowed for outside discussions 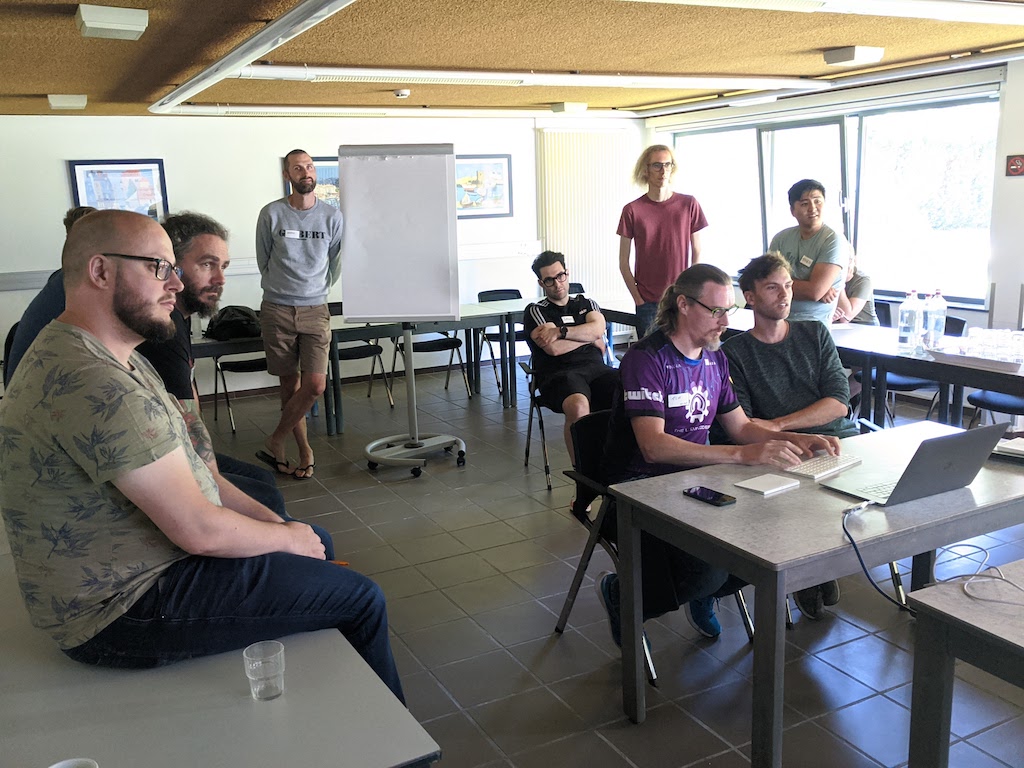 Pair programming with a “toxic” pair

The SoCraTes BE community and its conference lie close to our hearts. The idea of Triple D originated in one of the first conferences. Over the years, we were able to work together with several of the community members. We are proud to be a sponsor and loved helping organize this great event.